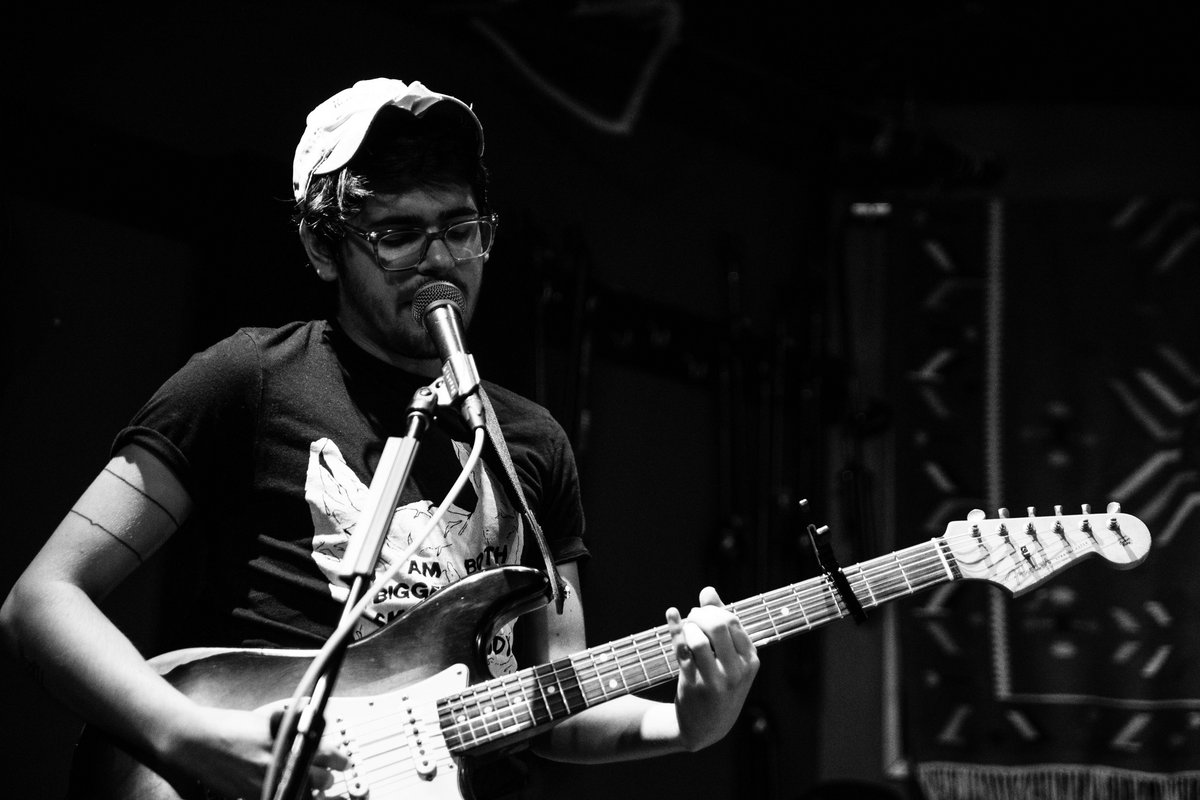 A candid interview with Alexander

We sat down with Alexander before our show with him at the Button Factory Stage for a very candid and honest interview about Big Nice, Wonderland, and G!

Trent: You have recorded a lot at Big Nice.

Alexander: I have, yeah, this is my third album that’s about to come out that I did with Brad.

John: Did you do the Du Vide stuff at Big Nice too?

Yeah we did that at Big Nice. And I didn’t really know Brad at that point so that was the beginning of our relationship.

J: Did you only work with Brad or did you work with Chaimes too?

Chaimes and Brad did the Du Vide record but that Alexander one was just Brad.

T: Was that kind of just luck that you wound up there?

I probably first met Brad at this house called White House in Jamaica Plain. I probably started going there when I was 15 or 16 and I would see like Ian Sweet and Horse Jumper play their first few shows there. Du Vide played their first show there. And this band called Soft Fangs – Brad played bass in that band. And he was wearing a full body carhartt suit. That’s when I first met Brad. He recorded all the Horse Jumper stuff and I’m really close with the Horse Jumper people.

J: What is your favorite chord?

Oh boy, uhmm…it’s funny because when I play in open tunings I really don’t know what I’m doing most of the time. But when I’m in standard I like to play in the key of G because there’s all those drone strings.

J: Very good chord. Alright, which artist before your time do you wish you could go back and see live?

J: I guess if you missed out seeing him that works. A lot of your work revolves around themes, lyrical and melodical. How do those develop? And how do those alter the writing process as they arise, if at all?

I talk a lot about doing things that I know are good for my mental health, and that I know will make me a more efficient and better person. That involves, like, going to sleep at the right time and eating well and taking my medicine and I think about those things all the time and I talk about them in therapy and the music is like a therapeutic expression. So I feel like those things just come out of, like, it’s just what I’m thinking about at the time.

J: So like, when you’re writing a song – and I’m especially thinking of Chicken and Focused Breathing –  there’s those two melodic ideas. Do those come up and you’re like, oh I should use those again, or does it just kind of happen?

Oh yeah, it also happens on the new record ;), it’s very intentional for me because I really think about the albums as a complete set. An art piece. So when I have those threads that I think about and what to put in, for me it just pulls the whole thing together. So now that it’s gone across albums, I used to be worried that it’s like a cop out, like I’m saying this same shit over and over again. But on the other hand, I care about this stuff and it gets expressed musically as well as lyrically.

J: Ok here’s a weird one. So I think a lot of people make a lot of assumptions about artists, like what they’re like, based on what the music sounds like. What’s the one thing people would be most surprised to know about you?

Ok, I am not that upset all the time. laughs It’s like, man, I listen to the whole album and go, “God, I’m not that much of a bummer!”  So here’s something that’s interesting about that; a lot of people will talk to me and come up to me or send me a message and be like, “Hey your album helped me get through this really tough time in my life, and this means so much to me.” And this is all stuff about like anxiety and depression, which is definitely a huge part of my life.  But it’s not all my life. And sometimes I wish I could express some other parts of me, like musically, but that’s the stuff that comes out easiest I guess. So I guess I’m an emotionally well rounded person. I like to think I am.

J: If you could go back in time and talk to a younger Alexander first picking up a guitar, what advice would you give yourself?

Oh man, “Don’t be so dramatic!” The first song I ever wrote was when I was 9, and it went, “Someday I will go outside, someday I will see the light, someday I will walk out of this pit of despair.” That was Alex at 9. But also at the same time I feel like when I was writing all throughout my teenage years, you have to write though a lot of bad stuff to get to the good stuff.  So I guess I will take it back. I would tell younger Alex, “Keep doing what you’re doing. Say what you want to say, and you’ll find what you’re looking for eventually.” I like how I developed as an artist.

J: So you wouldn’t change anything essentially?

Oh, actually I would. I would say, “Be better at guitar. Pay attention in music theory class.”

T: Ok a couple quick hitters. Who do you get compared to that you are most like?

People say Hovvdy sometimes. I guess there’s a kinship there. And like, Horse Jumper obviously.

Yeah, I don’t know. My old band got compared to Duster and like, Bed Head. But I never listened to those bands.

T: Who do you get compared to that you are least like?

T: Alright then, you are about to rock the button factory stage.

T: Are you pumped?

Yeah I really am, a bunch of people just came in.

J: Yeah that was exciting!

What a sweet and kind soul. Alexander’s new album Wonderland is out now. Between you and me, it’s really good, the dude can play guitar. Do yourself a favor and give it a listen, or twenty! Hope to see you again soon, Alex.